Based on my previous posts we are now able to build a system that can receive, store and visualize data by using Node-Red, InfluxDB and Graphana. Grafana allows us build dashboards, query and visualize the stored data across time efficiently by using, in our case, the InfluxDB database engine. So far we’ve used simple line/bar charts to visualize data but we can use both Node-Red and Grafana to plot data onto a map:

Both have pros and cons, but the main differences between the two is that Node-Red Worldmap is suited more to real time display, and the Grafana plugin is better adapted to display data based on some time based query. Other major difference is that Node-Red Worldmap would require some coding, but, at least I consider it, at an easy level, and the Grafana plugin is much harder to make it work.

After restarting and deploying a worldmap node, the map should be available at: http://server:1880/worldmap or other URL depending on the Node-Red base configuration.

One thing to keep in mind is that Node-Red is single user, so all instances of world maps (several different clients/browsers) will always have the same view.
The simplest way to start using the worldmap is just to copy and deploy the demo workflow provided by the node, but the key concept is that each point has a name and a set of coordinates.

The cool thing is that if we inject repeatedly the above message (keeping the same name) but with different coordinates, the data point will move across the map in real time, and as I said earlier, the move will be reflect onto every client.

So all we need is an Inject node to a function node with the above code and feed it to the world map: 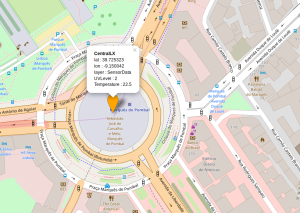 The Grafana Worldmap plugin can get the location data in several ways. One of them is to use geohash data that is associated to the values/measurements.
There is a Node Red Geohash node that generates the geohash value from the latitude and longitude of data location. As usual we install the node:

and then the Grafana plugin. We just follow the plugin instructions:

With this per-requisites installed we can now feed data onto the database, in our case InfluxDB, that will be used by Grafana. We just need make sure that we add the geohash field. The geohash node will calculate from the node-red message properties lat – latitude and lon – longitude the required info:

Using the Influx tool, we can query our database and see that the geohash localization is now set:

Anyway for setting up the World map plugin to display the above data was not straight forward, so the following instructions are more for a startup point rather than a solution.

The first thing to know is that the plugin is waiting for two fields: geohash and metric. With this in mind, before wasting too much time with the map plugin, a table panel that is filled with the required query is a precious tool to debug the query:

After we infer from the table that the data is more or less the data we want, we just transfer the query to WorldMap plugin:

Notice two important things: The aliasing for the query field to metric with the alias(metric) instruction, and the Format as: Table.

We can now setup the specific Worldmap settings:

On the Map Visual Options , I’ve centered the map in my location and set the zoom level. Fiddling around here can be seen in real time.

On the Map Data Options for this specific example, the Location Data comes from a table filled with the previous query (hence the format as table on the query output), and we want to see the current values with no aggregation.

When hoovering around a spot plotted on the map we can see a label: value, and the label used is obtained from a table field. In my case I just used geohash (not really useful…). Anyway these changes only work after saving and reloading the panel with F5 in my experience.

At the end we have now graphed data and localized data:

If we drag the selector on the left graphic panel, or select another time interval on top right menu of the grafana dashboard, the visualized information on the map changes.

Our software stack installation ends with configuring and installing Grafana. Ubuntu installation instructions are at this Grafana documentation link..

Installation is as easy as to download and install the latest Grafana dashboard version:

In my case, the above instructions where enough to install successfully the software.

After installing if we will access the Dashboard through a reverse proxy, check out my previous post to configure correctly the Grafana server: Grafana Reverse Proxy

We can now start the Grafana server but if the server is exposed to the public internet the first thing to do is to change the default admin user password to something safe, or better yet, create a new admin user with a strong password and delete the admin default account.

We should press the top left icon, choose admin and then Global users. We can now select the Admin user and change the default password:

Here we also can create a new admin account, which is my recommendation.

In our case we will configure a single InfluxDB datasource. Note that we didn’t defined any authentication for the InfluxDB server, so no access credentials are needed yet, but we should set ones as soon as possible.

Since Grafana and InfluxDB are running on the same server we use the base URL http://localhost:8086. Make sure that the connection type is set as proxy.

After setting the datasource name and datasource database, press Save & Test and it should report success.

We are now able to create a basic first dashboard by building some charts/graphs based on the previous created data source.

Press the New Dashboard button to create a new dashboard. In case that you don’t have a screen as the above screen shot, just press the top left Grafana Icon, select Dashboards and then New.

The following screen should appear where we can add graphical panels to show our data. We should the way that we want to show our data, by selecting the Graph type. The selected graph type should reflect immediately on the panel below. To edit the panel source data we should press the panel title and a pop-up window will appear, and then we press Edit.

We are now able to edit the associated queries that will fill the panel with data. Associated with the panel we can have multiple queries for the source data. In the default case a default query named A is already set up. We just need to change our measurement field to the correct one, which in our case could be Temperature or heap, based on the previous post (InfluxDB data configuration)

We need now to press the Select Measurement and a drop down box with the available measurement should appear. We select the one that we want and data should now appear on the above graph.

From now on is just a bit of perfecting things out like giving a sound name to the panel in the General tab and at the end pressing the Save icon on the top of the screen.

A more or less standard software stack used for control, processing and displaying data, has emerged that is almost used by everyone when hacking around on Arduinos, ESP8266, Raspeberry Pi’s and other plethora of devices. This “standard” software stack basically always includes the MQTT protocol, some sort of Web based services, Node-Red and several different cloud based services like Thingspeak, PubNub and so on. For displaying data locally, solutions like Freeboard and Node-Red UI are a great resources, but they only shows current data/status, and has no easy way to see historical data.

So on this post I’ll document a software stack based on Node-Red, InfluxDB and Graphana that I use to store and display data from sensors that I have around while keeping and be able to display historical memory of data. The key asset here is the specialized time-series database InfluxDB that keeps data stored and allows fast retrieval based on time-stamps: 5 minutes ago, the last 7 days, and so on. InfluxDB is not the only Time-Series database that is available, but it integrates directly with Grafana the software that allows the building of dashboards based on stored data.

Setting up Node-Red with InfluxDB
I’ll not detail the Node-Red installation itself since it is already documented thoroughly everywhere. To install the supporting nodes for InfluxDB we need to install the package node-red-contrib-influxdb

We should now restart Node-red to assume/detect the new nodes.

Installing InfluxDB
We can go to the InfluxDB downloads page and follow the installation instructions for our platform. In my case I need the ARM build to be used on Odroid.

The InfluxDB engine is now decompressed in the newly created directory influxdb-1.2.0-1. Inside this directory there are the directories that should be copied to the system directories /etc, /usr and /var:

Copy the files to the right location. I’ve added the -i switch just to make sure that I don’t overwrite nothing.

We need now to create the influxdb user and group:

We need now to change permissions on /var/lib/influxdb:

We can now set up the automatic start up script. On the directory /usr/lib/influxdb/scripts there are scripts for the systemctl based Linux versions and init.d based versions that is my case. So all I have to do is to copy the init.sh script from that directory to the /etc/init.d and link it to my run level:

And that’s it. We can now start the database with the command /etc/init.d/influxdb start

We can see the influxdb logs at /var/log/influxdb and start using it through the command line client influx:

Installing Grafana
We need now to download Grafana. In my case for Odroid since it is an ARMv7 based processor, no release/binary is available.
But a ARM builds are available on this GitHub Repository: https://github.com/fg2it/grafana-on-raspberry for both the Raspberry Pi and other ARM based computer boards, but only for Debian/Ubuntu based OS’s. Just click on download button on the description for the ARMv7 based build and at the end of the next page a download link should be available:

Set the automatic startup at boot:

And we can now start the server:

We can now access the server at the address: http://server:3000/ where server is the IP or DNS name of our ODroid or RPi.

Conclusion:
This ends the installation part for the base software.

The following steps are: