The Sigfox network provides a backend service where all Sigfox network devices messages are received and where the client/customer can pick up data from it’s own devices through Sigfox provided REST API. But using the REST API means that we need to pool for messages availability, which is not very efficient.

Another alternative provided by the SigFox backend is a callback mechanism. The callback mechanism can be done through email, where the data is sent by email to the destination, or through an HTTP call to a client/customer owned server. In my case I’ve used a open access IBM Node-Red Server available on the Internet as my own callback server, to process the call backs.

With IBM Node-Red we can easily  bridge the HTTP callback call to a MQTT topic publish. With this HTTP-MQTT bridge it means that every HTTP callback generates an MQTT publishing event, and so any subscriber listening to the associated topic receives the Sigfox message. From here we can now do whatever we want, and still using Node-Red, we can process the data, or store the data on databases, like InfluxDB where we can then use Grafana to graph the data.

Callbacks to the client/customer private server can be of type Uplink or Bidirectional. In the first case the private server just receives the data. On the second case the backend server, receives the data and responds with something meaningful that is sent to the device, if the device asked for a downlink response.
The response of the private backend server to the Sigfox backend server must be under 10s, otherwise the Sigfox servers will call one more time before raising an error. Also the downlink responses to the devices are, as far as I’m aware, not sure on this, limited to 12 messages per day.

For the callback configuration we have the following screen:

So an email callback definition for processing incoming data (uplink) from the device by receiving data and sending an email can be as follow: 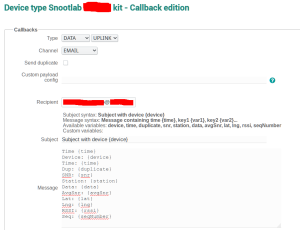 Or we can call a backend server and return a response to the device if requested. The call can be made through a GET request where the message parameters are sent on the query string, or through the POST or PUT method where the body can be a JSON body with the data:

To let the above callback to define the return data to the device, when a downlink message is requested, we must change the device configuration: 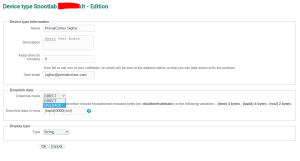 Otherwise, when direct mode is defined, the access point ID and RSSI is returned.

Also for the HTTP callback, there is the possibility of a HTTP batch callback, where several device messages that arrive in one second at the Sigfox backend, are grouped in a single callback call. This avoids heavy load on the call back private server.

Sigfox Callback to MQTT bridge:
This is rather simple to build with Node-Red: 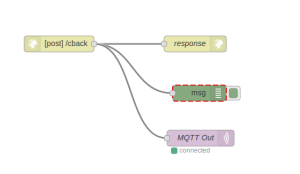 So we now define the callback as a POST call with a JSON object to the /cback path as defined on the HTTP input node as it can be seen on one of the above screenshots. The URL to be defined on the callback definition should be something like: http://node-red-ip:1880/cback

So now every Sigfox message activates a callback to the Node-Red HTTP Post node, and the message is routed to a MQTT out node for the /sigfox/messages topic.

An example of a received message by Node-Red is:

So all is needed now is to process the data field from the JSON object and do something with the data.

For more information regarding callbacks, check out: SigFox Callback Documentation

View all posts by PrimalCortex

One thought on “Sigfox BackEnd – Receiving and processing data”

This site uses Akismet to reduce spam. Learn how your comment data is processed.